The 1883 volcanic explosions of Krakatoa, on a small island in the Sunda Strait of Indonesia, produced pyroclastic flows, downpours of hot volcanic ash and the loudest sound in recorded history, but all of those pale in comparison to what made the event so catastrophic.

Krakatoa’s last major eruption was over two hundred years earlier in 1680 and damage had been contained to the island. Knowledge of this had lulled the residents of Western Java and Southern Sumatra, only 20 miles away, into a false sense of security. 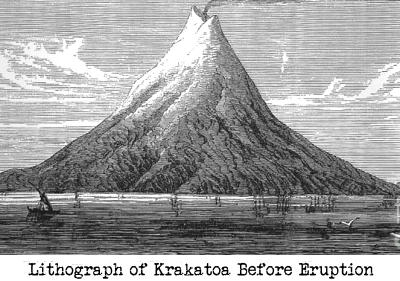 On May 20, 1883, Krakatoa began a series of small eruptions that belched huge plumes of steam and ash. These eruptions continued unabated throughout the summer. The dull boom of volcanic thunder became a common occurrence and the locals shrugged it off. The Javanese and Sumatrans continued life as they had for centuries.

In fact, after the May 23rd eruption, Krakatoa became a bizarre tourist attraction with curious guests ferried to the island to explore the volcano. 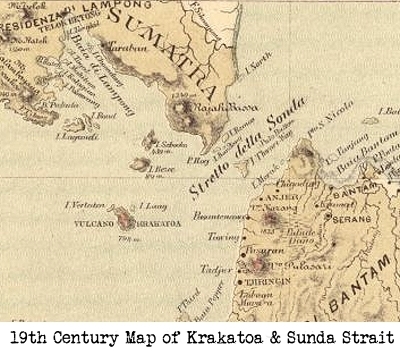 The festive illusion was shattered on Sunday, August 26th when Krakatoa erupted at 1:07 pm. A larger eruption at 4:25pm sank the northern two-thirds of the island, unleashing giant waves that slammed into nearby coastlines, but that was only a taste of what was yet to come.

The next morning, Krakatoa commenced a series of four incredibly massive eruptions at 5:30 am, 6:44 am, 10:02 am and 10:52 am. The 10:02 eruption was so powerful that that it was heard on the island of Rodrigues near Mauritius, four hours later and over 3,000 miles away, as distant cannon fire.

That’s the equivalent of an explosion in Anchorage, Alaska being audible in Dallas, Texas. 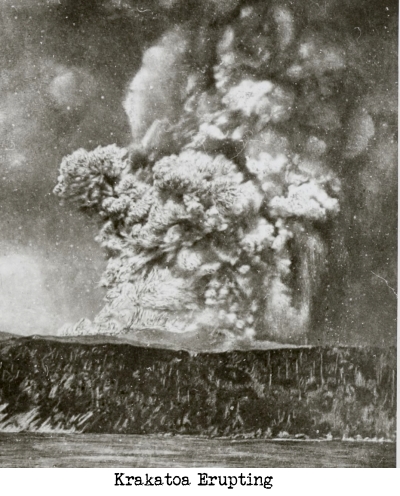 Eardrums were ruptured 40 miles away and people up to 100 miles away suffered permanent hearing damage. A sound level of 174 decibels was recorded by barometers 100 miles from Krakatoa. The threshold for pain is 140 decibels. 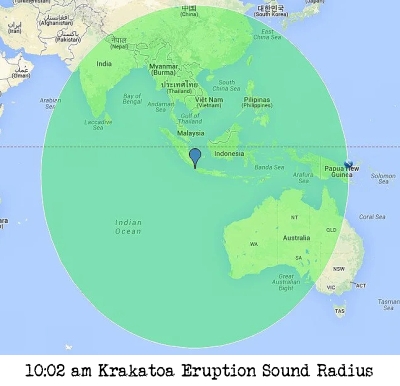 Krakatoa’s eruptions produced super-heated pyroclastic flows that reached as far as 40 miles and massive waves that brought death and destruction to the shores of Java and Sumatra, but the climactic 10:02 am eruption on August 27th, 1883 did something more.

It spawned a monster.

The 10:02 am eruption launched a 120-foot wall of water that roared across the Sunda Strait at 60 miles per hour while scalding ash and pumice rained down from the heavens like a blizzard from hell. The sun disappeared behind a black sky and day became night. At 10:30 am, a Javanese farmer working in a rice paddy five miles from the coast looked out towards the water and saw something in the distance.

“All of a sudden there came a great noise. We saw a great black thing, a long way off, coming towards us. It was very high and very strong, and we soon saw that it was water. Trees and houses were washed away. Not far off was some steep sloping ground. We all ran towards it, but the wave was too quick for most of them. There was a general rush to climb up in one particular place. This caused a great block, and many of them got wedged together and could not move. A great struggle took place for a few moments, but, one after another, they were washed down and carried far away by the rushing waters.” 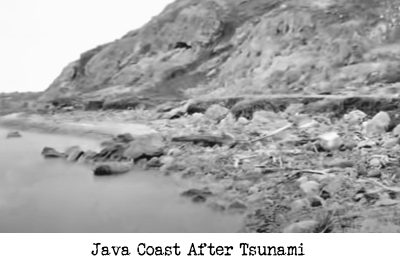 The Krakatoa Tsunami obliterated 165 coastal villages on Java and Sumatra. On Sebesi Island, the closest island to Krakatoa at 7.5 miles, all 3,000 residents perished. The official death toll recorded by the Dutch authorities was 36,417 with 90% attributed to the tsunami, but some today put the death toll as high as 120,000.

We will never know the true number. Communication was sparse and the sky was dark for days. Many who saw the wave did not live to tell the tale.

Nine months later, in May 1884, schoolboys walking along a beach on the island of Zanzibar in East Africa stumbled upon a massive raft of black pumice covered with the bleached bones of dozens of human skeletons. They were intertwined with the skeletons of numerous monkeys and two tigers. They had floated over 4,500 miles.

In some films and documentaries, there are two dramatic events credited to the 120-foot wave. One is the destruction of the 4th Point Lighthouse at Anjer, Java. The other is the heroic action of Captain T. H. Lindemann, of the 1,436 ton Gouverneur Generaal Loudon, who reportedly steered his ship directly into the tsunami, saving over 300 people aboard. 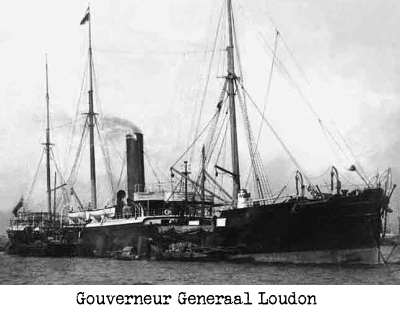 These events actually happened, but they were the result of smaller waves created earlier by the 5:30 am and 6:44 am eruptions. Eyewitness accounts confirmed both. These waves were 35 to 50-feet high. Enormous, but less than half the height of the 10:02 am behemoth and they traveled nowhere as far inland. Most deaths attributed to them were in harbors and places close to shore.

The 4th Point Lighthouse would’ve survived, but the wave that hit it carried a 600 ton block of coral that pulverized the structure, detaching it at the foundation. Amazingly, the lighthouse keeper made it out alive, but his wife and child did not. 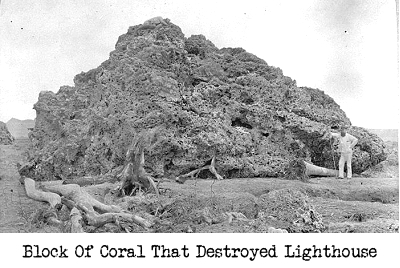 Captain T. H. Lindemann turned his ship directly into a wave approximately 50-feet high and his ship swept over it. He continued into the Sunda Strait where he anchored in deeper water and left his throttle at half power while pointed in the direction of Krakatoa. He was blasted by hurricane force winds for hours while his crew frantically shoveled volcanic ash off the ship. It would’ve taken only twelve inches of accumulated ash to capsize the vessel.

The 4th Point Lighthouse was rebuilt in 1885. The red brick circular foundation of the original sits nearby as a memorial. The height of the new lighthouse is approximately that of the Krakatoa Tsunami. 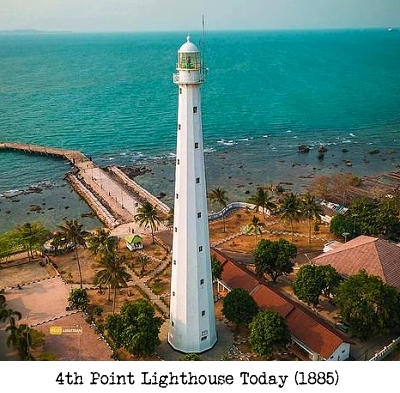